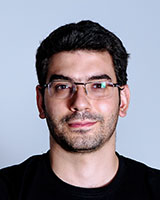 Saleem is a Syrian entrepreneur and eCommerce advisor since 2009, when he founded the first online food ordering service in Damascus that later expanded to cover most of Syria and was recognized by SHELL LiveWire programme as the best established business in 2010. Two years later, due to the conflicts, he had to shut it down and move to Jordan.

There, he worked as a consultant for more than 300 online stores, then started Sharqi.shop, an online marketplace that provides Syrian artisans with all the backup they need to sell their creations online and access international market.

During his journey, Saleem has won many prizes such as Nasa Apps competition and Techfugees prize. He was also selected to represent Syrian entrepreneurs in the EUTF conference in Brussels.

Saleem has raised funds to launch his startups from Oasis500 and the European Union and built partnerships with UNICEF and Mercy Corps. Also Spark appointed Saleem as an inspiring entrepreneur to speak for their trainees and on their website.

Sharqi is just a story, about utilizing entrepreneurship and technology to help refugees help themselves.
As a Syrian entrepreneur myself, who lost his startup due of the war in Syria, I thought my share of the struggle was huge. However, comparing to the Syrian artisans’ struggle to launch workshops from scratch was so inspiring to launch Sharqi Shop.
As humans, each one of us has a story, and surely each Syrian artisan has a story that deserves to be shared.
Thank you EYA for allowing us to share a story that is a bit different from the stereotype of Syria in news, it’s about peaceful Syrians who are not willing to be a burden by working hard to providing the world with amazing handmade creations."