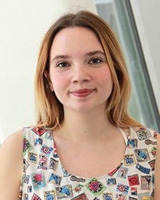 Paula has a Bachelor’s degree in Computer Science from New York University Abu Dhabi. She spent her summers throughout university interning as a software engineer at Google in their London, Munich and New York offices, and spent her first year after graduating in 2018 working in the Securities division of Goldman Sachs’ Hong Kong office. Having worked as a developer in both the tech and finance industries, she has personally experienced the lack of diversity among their workforces and is adamant about changing these numbers. Paula met Dora and Beatrice at NYUAD, and was one of the first weSTEM members. She is originally half-Romanian and half-Russian.