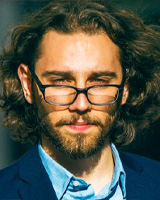 At the age of seven, Abdullah made his first interaction with a Video Game in Syria. Playing video games was a crucial role in his life, it made him escape the cruel war in Syria through a virtual dimension. When Abdullah turned 18 he had to flee his country, which resulted in a journey that would change his life forever.
Abdullah was forced to face all false interpretations and stereotypes about his people, this motivated him to share with everyone the real burden and challenges of a Syrian kid. This life journey helped reveal opportunities that were not possible before. Through this he met the founder of Causa Creations - Georg Hobmier. Together, sharing one vision, they created the concept of the video game Path Out. The prototype was released and got strong attention from the media. It won numerous awards, one of them being the Future zone’s Best Austrian Game Award.
Through this achievement Abdullah had a moment of clarity. Now, he focuses to raise the awareness of video games to the public and expressed the positive impact they have to our intelligence and education.