Students work along with #EYA18 Winners 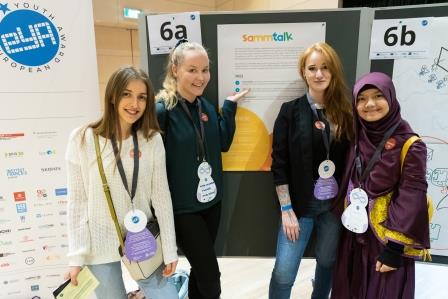 European Youth Award is not only about encouraging young people to use digital technologies to create a better future. It’s also about bringing people together, no matter where they come from. Part of this idea is the Student Program – both on local and international levels, students come together to create a project based on a EYA winners ideas. Students develop a marketing plan, create a presentation of the project and work closely with the winners to share their ideas.

Sonia García Ortiz, the Student Program coordinator explains how the project works: “Each student chose a winning project and then four students from different countries worked on the same assignment. Students worked online via skype, had a first virtual meeting with their coordinator and then carried on on different platforms. When it comes to the local teams –students only had 24 hours to prepare their projects. They had the same tasks – to come up with ideas to improve the winning projects.”

The project brought together around 80 students from Hungary, Macedonia, Bosnia and Herzegovina, Denmark, Romania, Germany, Switzerland, Finland and Austria.

To some of the participants this wasn’t the first European Youth Award Festival. Aleksandr from Macedonia came to Graz for the second time: “This year people are more willing to work and commit their time, they found the project interesting and wanted to get involved.” The economy student was happy that everyone found a way to contribute to the project: “We chose the project only by its name, we didn’t know anything about it. We all came from different educational backgrounds and all had different topics we wanted to talk about. A girl from marketing did design, another one from applied sciences worked on customer relations, so it all fit in very well.”

International Student Project participants worked together for over a month, but did not get to see each other until they met in Graz. Corrin from Switzerland said: “It was interesting to see how people looked without the headphones on!”

Corrin also said that having a coordinator by their side kept everyone on track: “If we started talking about something else, the supervisor would remind us what we need to do, that was very good!”

Local teams had less time to get their projects ready. Philip from Austria said they worked for three or four hours after they got their topics. However, time wasn’t an issue: “The hardest part was the idea creation at the beginning. So, we didn’t know how to start. We had a lot of ideas and we had to find the best one. It was the biggest problem.”

Although all students had to put a lot of work into their projects, what they got out of them cannot be measured: “I met so many interesting people and we have a lot of other things in common, not just the project. I travel a lot so I hope I will see other group members again!” said Aleksandr. Gven from Macedonia said he would want to come back next year: “Everyone should come and experience this. You work with different people from different backgrounds. Also, you learn how to connect digitally. When you meet face to face you have a chance to share your stories and ideas. Everyone should do it. I know people who have been here twice which means that everyone enjoys it.”

This year, both international and local winning teams of the Student Project were awarded at a Gala ceremony.

To everyone who would like to take part in the EYA Student Project, Sonia says: “The professors should get in touch with us. They would have to get involved, coordinate projects and also bring students. Universities can take part in the project every year.”