Every year outstanding personalities recognize the work of EYA Winners and congratulate them on their efforts and  engagement! Read their messages to the Winning teams! 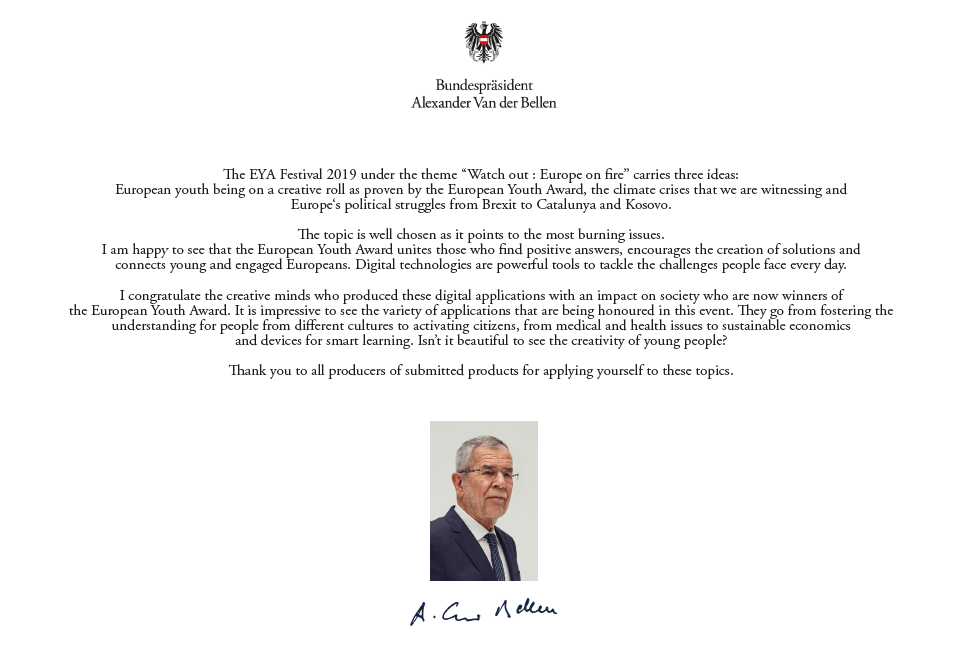 In order to keep Europe’s promise to remain a wealthy part of the world to our citizens, we must do better than that. And we can! With regard to the European Way Of Life, which is epitomized by values like human dignity, individual freedom, democracy and the rule of law, we have a specific role to play.

We have to strengthen our efforts in education, especially in the field of software engineering and coding, and empower girls and women. In addition, we have to increase our public investments in the digital sector, in particular in the area of artificial intelligence.

We have to be aware of the strong connection between innovation in digital fields on the one hand and our security, prosperity and social cohesion on the other hand. We must spend a much greater portion of our defence budgets on digital innovation within Europe, instead of spending it abroad.

Education and innovative solutions in the sense of social entrepreneurship are means and measures that can be considered as typically „European“! That is why I have always seen the European Youth Award as a shining light and a great promise for the future of Europe’s contribution to the world.

Member of the European Parliament

The European Youth Award (EYA) contest is much more than just a competition, it is about social good. It is an important movement which improves the world we live in.

For me it is great to see the innovative and creative work of young people contributing to societal progress and addressing the real issues affecting citizens all over Europe.

These young leaders of tomorrow know how to use modern communication technologies to take action and achieve impact. They demonstrate their potential to create innovative solutions.

The EYA Festival is an established platform for international knowledge-exchange and a widely recognized networking-event for future cooperation. It fills me with pride that the Federal Ministry of Finance gets to support this important initiative.

Digitisation is a huge challenge for European education systems, and whilst simultaneously offering many opportunities for the future of learning. We are currently faced with the important task of equipping the youth with the skills necessary to be prepared for future developments. The EYA competition offers young people a great opportunity to prove their digital creativity and to work towards creating a sustainable and digital future. I would like to congratulate all this year’s winners and to thank all participants for their active involvement.

Digitalization as Chance for European societies & the future of the EU

Digitalization is the new era we are living in. Adaptation to digitization is a key success factor for economies and societies not only in Europe but all around the world.

Only the conscious and responsible use of the inspiring, exciting yet also worrying achievements of digitization enables us to react to the global and regional challenges of the future properly and effectively. Combining human creativity with the practically unlimited computing capacity of machines in a soaring global digital flow of data and information gives us the opportunity for a higher living standard in a more viable, healthy and sustainable environment. For reaching this goal continuous improvement of digital competitiveness – as the growth engine of the European Union – has to remain in focus. Besides all the disruptive innovations and the adaptation of digital technologies we must not forget the human aspect: we all need to be prepared and develop new skills to be able to cope with digital challenges.

Building networks, supporting young creatives and innovative teams and providing infrastructure for start-ups and company founders are common concerns of the Styria Economic Chamber and the European Youth Award.

Since the first EYA edition in 2012, our partnership has grown stronger every year.  This year, in a “Solution Jam Session” the team of the chamber of commerce will be challenged by the ideas of the participants of the EYA. We will try to find out how Artificial Intelligence (AI) and Speech Recognition in our applications can support our members in service and transactions.

We perceive the EYA in connection with Euroskills 2020 in Graz as a European and international signal for the youth – to empower innovation and creativity, to deal with ideas for best services in both traditional and modern crafts as well as the start-up scene, to learn from each other, to exchange individual approaches to technology and to strengthen the spirit of entrepreneurship.
As the president of the Styria Economic Chamber I’m looking forward to this year’s festival, welcoming all the young and inspiring people from all over Europe.

President of the Styria Economic Chamber

Who shapes the future? Will it be the young people marching in the streets who decide on future policies or is artificial intelligence taking over decision-making processes to decide for the better of humanity? What can be done locally, in my city and in my community to include citizens and overcome political lethargy?  Are we taking adequate measures to reduce global warming?

Technology should be used to improve the lives of people. And that is exactly what we see when we look at EYA Winning Projects: creative young people using technology to improve living conditions.

It is my pleasure, to be part of this European-wide initiative for so many years and to see the creativity, enthusiasm and professional knowledge of engaged young people actually changing society for the better. My heartfelt congratulations to the winners of 2019, you are true change-makers!

We use cookies to ensure that we give you the best experience on our website. If you continue to use this site we will assume that you are happy with it.OkRead more