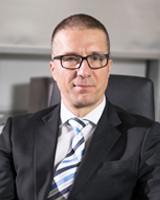 During his studies in the early ‘90s, Mr. Tadic began his professional career as a marketing manager within music, fashion, concert organization, promotions and fashion shows in Novi Sad and Belgrade. In 1994, he initiated the opening of his business company – a design and printing studio, as well as a radio advertisement production.

In 1998 he joined his father at company Neofyton as a general manager, a position which he has been holding since then. Neofyton is an exclusive representative of the world’s leading producers in the plastics and rubber processing industry: Serbia, Croatia, Montenegro, Bosnia, North Macedonia, Slovenia and Nigeria. With over 27 years of experience in the design of plastic injection systems, their goal is to deliver the highest standard of service possible at the moment – the highest quality equipment and service, from one source. It is the integration of the process – sales and consulting, delivery and commissioning of machines, service and training, as well as partnership with customers, the basic backbone of their business and development. Neofyton has managed to bring many successful projects and to maintain a great business reputation since 1992.

During his career, Zoran has completed numerous courses and trainings related to engineering, sales strategy and finance. In 2011, he began his educational development at Oxford University, where he completed the “Oxford Program on Negotiation at Oxford” and in 2012 the “Oxford Finance program for Senior Executives”. At the same University in March 2015, he completed post-graduate studies on a Master’s level in Global Business at “Said Business School”. Currently, he is on his final year of Ph.D. studies in Finance and Banking at the European Center for Peace and Development (ECPD) in Belgrade.