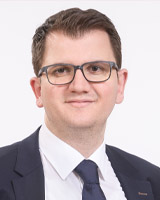 Tomislav was born in 1985 in Vienna, where he attended school and completed his university education. He studied Business Administration at the Vienna University of Economics and Business Administration, specializing in finance and accounting. After completing his bachelor’s degree in 2010, he started his professional career as a trainee at an international auditing and tax consulting firm in Vienna. Mr. Stipic has been head of the Baden office since joining the company in January 2017. He was appointed authorized signatory in June 2017 and has been a partner of ARTUS since the beginning of 2018. His main areas of expertise include tax, social security, and business consulting for SMEs and freelancers, in particular for medical consultants; as well as all areas related to real estate companies and construction companies, and consulting for farmers and foresters. Mr. Stipic dedicates his free time to his family and is a passionate athlete.

with kind support of