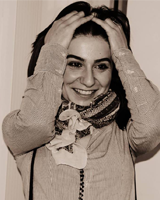 Tatevik Markosyan is a development specialist with background and experience in non-governmental organizations and social projects. From 2007 Tatevik has been managing initiatives aimed at bridging gaps between the youth affected by conflicts and social disparity.

Tatevik was born in Yerevan, Armenian. She holds MA degree in Linguistics from Yerevan State Linguistic Univsersity after V. Brusov, while in 2012 Tatevik received her second MA degree in International  NGOs from Webster University, Leiden, the Netherlands. Tatevik joined the CityBugs team in 2012 and has been leading the development and networking team since then.