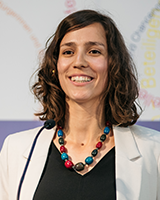 Stefanie works in the Department of International and European Cultural Policy within the Federal Chancellery of Austria and is in charge of the National Contact Point of the EU-Programme Europe for Citizens. This programme is an important instrument encouraging EU citizens to take part in the European debate and play a stronger role in the development of the EU. Stefanie advises research, cultural, educational and youth institutions, civil society organisations as well as municipalities and cities on EU projects dealing with democratic and civic participation, European remembrance, solidarity, EU values, and cultural heritage. Besides, she works within the bilateral cultural cooperation in Austria promoting cultural exchange and intercultural awareness activities among European and non-European countries.

Stefanie has gained experience in the Austrian UNESCO Commission, where she mainly worked in the context of the 2005 Convention on the Protection and Promotion of the Diversity of Cultural Expressions. In 2016, she was a jury member for the first Austrian Youth Award.

Stefanie studied Musicology and Romance Languages and Literature at the University of Vienna and the University of Catania. She is a passionate musician and committed to gender equality, cultural participation, and sustainable living.