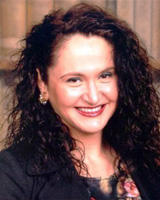 Remzie Shahini-Hoxhaj is an Assistant Professor at the Journalism Department University of Prishtina “Hasan Prishtina”, where she has been member of the faculty since 2006. She is a Director and founder of the Media Institute of this University. She completed her PhD in Communication and Journalism at Vienna University (2014) and received a double Masters in Intercultural Communication from Viadrina University Frankfurt/Oder, Germany, and St. Kliment Ohridski University Sofia, Bulgaria (2004). She finished undergraduate studies in German Language and Literature at University of Prishtina (2001). Her research interest is in transitional societies, television, new media, communication culture, media literacy and the impact of visual media. She has developed a strong sense of devotion for education and human rights due to her experience in different international projects in Kosovo since 2000. She lectured and presented in many international conferences all over the world. Remzie is Board Member of the European Communication and Culture Society (ESEC) and President of the Kosovar Austrian Society (OEKG). She has received many awards for her work and is a mother of two. She fluently speaks Albanian (native), Serbo-Croatian, English and German.