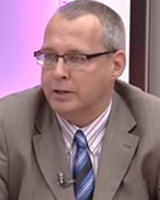 Before becoming a freelance consultant for quality management, Oliver Schuett was working for the OSCE Mission in Kosovo from 2014-2019 as Section Chief for Public Participation. He started his career with the Bosch Foundation as lecturer in Russia in 1999, worked as consultant for micro-loans for the European Bank for Reconstruction and Development in Central Asia and later for Central European University in Hungary as Director for special educational projects with North Korea. In 2006, Oliver switched to the development sector, working as senior training expert for the German Development Service in Indonesia and the Gesellschaft für Internationale Zusammenarbeit in Kosovo. He holds a Bachelor´s degree in Post-Soviet Studies (Carleton University, Canada), a MA in Diplomacy and a PhD in International Relations (both from the University of Birmingham, UK).