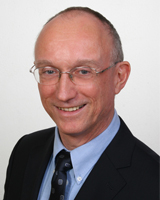 Michael Paulweber was born in Salzburg, Austria. 1979, he received a master degree in electrical science and control theory from University of Technology in Graz, and completed his doctorate in control theory five years later. In 2008, he added an Executive MBA degree at the St.Marys College of California, USA.
He worked from 1978 to 1983 at the Institute for Control Theory and Process Automation of the University of Technology in Graz, Austria.

Then he joined AVL List GesmbH and became head of development for the test system automation and control product-line. The products are meanwhile global market leaders in the automotive domain. He gained expert knowledge in embedded software architecture and its development processes.

He introduced global software development processes successfully in the AVL ITS division and completed the first official SCAMPI-A CMMI appraisal in Austria (CMMI level 3 in an external SCAMPI-A appraisal).

2012 he was appointed director of global research and technology management in the AVL instrumentation and test system division.
Michael Paulweber and his team led many development and research projects. Examples are the large EU research projects CRYSTAL and ENABLE-S3 with more than 70 M€ project size each.

Michael Paulweber is vice president and member of the steering board of the large European Industry association for embedded and CPS systems ARTEMIS-IA.

with kind support of