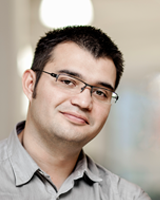 Max Ortiz Catalan received his degree in Electronics Engineering in 2005 by the ITEMS Campus Toluca, Mexico, from which one year was done at the Université de Technologie de Compiègne, France. He worked two years for the manufacturing industry before joining the M.Sc. program in Complex Adaptive System at Chalmers University of Technology (CTH), Sweden, from where he also obtained his PhD in Biomedical Engineering in 2014.

During his PhD, he was invited researcher at Neural Rehabilitation Engineering Lab in the Université chatolique de Louvain, Belgium, and Research Engineer at Integrum AB, Sweden. He has won several academic and industrial awards such as “student leadership and academic excellence” by ITESM, Mexico; the “Young Scientist Forum Scholarship” by GöteborgBio, Sweden; and the youngest recipient of the “You Can Make a Difference Award” by one of the world’s largest transnational companies. He is currently Research Scientist at CTH and the Centre of Orthopaedic Osseointegration at Sahlgrenska University Hospital, as well as R & D Manager at Integrum AB.