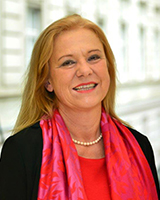 Elisabeth Freytag-Rigler is Director in the Austrian Ministry for Sustainablity and Tourism. She is in charge of EU Coordination.

She graduated from the Economic University Vienna. From 1986 to 1988 she was Assistant Export Manager in a famous Austrian company (Riedel Glas, manufacturing lead crystal glasses). She works in the field of the environment since 1988 when she started in the international department of the ministry. She was promoted head of unit in 1990 and since than working with EU affairs.

During the Austrian accession negotiations to the EU she was at the Austrian Perm Rep in Brussels. After a year of maternity leave in 1995/96 she spent a year at the Hungarian Ministry for the Environment, as a pre-accession adviser.

Apart from EU coordination she always had a focus on sustainable development and gender issues. She was for many years in charge of gender in the ministry. She is a co-founder and chair of the European Sustainable Development Network (ESDN) and project leader for “Growth in Transition” – a project dealing with growth issues where around 25 institutions (including EEA) are participating. She published several books.

Elisabeth Freytag-Rigler has been the Austrian member of the Board of the EEA for many years and was elected as a chairperson in June 2014.