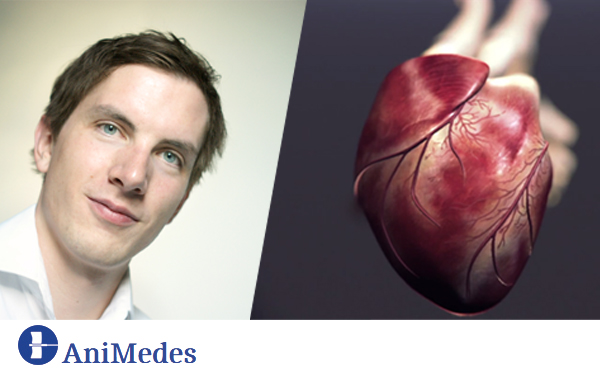 Johannes Alesch studied 3D-Animation, developed Animedes and won #EYA2014. Read in this interview how he further developed his project and what it was like to be an EYA Winner.

How would you describe your project in three sentences?
AniMedes is a software that helps patients understand their treatment and doctors explain & document those treatments. Patients are being informed by watching short 3d-animated movies instead of being confronted with scientific texts. Doctors on the other hand have a powerful tool to document and conduct well-structured patient education sessions, saving them time and trouble.

What was your motivation/intention to start AniMedes? What were your expectations when you first started AniMedes?
I experienced firsthand that the information available to patients prior to surgery is not always what they would need or expect. In fact, it was often quite the opposite. I studied 3D-animation back then and decided to combine that with medicine.
My expectations of course were influenced a lot by the early stages of the “startup-rush” that is still taking place right now in Austria. Back in 2010, it was nothing like it is right now, but the hype was “in the air”, like a storm in the making. As a young founder I felt like I could create an international company with the flick of a switch, in only a few years. My expectations were very high. I soon saw, however, that it took a lot more time and effort to implement changes in medical systems/markets than I originally thought. This never had an influence on my motivation though, as every day still brought on interesting challenges and projects. It also made me smarter and more patient as a businessman, not chasing after unrealistic role models all the time.

You won the European Youth Award 2014 in the category “Healthy Life”. Can you describe this experience?  What were the most valuable things you learnt for your project? What did change for you after winning EYA2014?
The EYA2014 was a very fun and interesting event that highlighted a few very bright and excellent ideas. I met a lot of extremely motivated and eager young people and to some of them I still have quite regular contact. The overall winner GovFaces was especially inspiring and would be of great use in today’s (not only Austrian) politics.
To be fair, not much has changed after the EYA2014, apart from the usual media repercussions after being a finalist/winner at the event. The attention it brought was of course quite useful 😉

How did your project further develop after EYA 2014? Did you receive any other awards?
After #EYA2014 AniMedes went on to win a top-3 placement at the Salzburger Wirtschaftspreis (Salzburg Economy Awards) in 2015. Apart from that, there were no awards or major honors to be received, mainly due to the fact that we focused on further development of the product and building our customer base instead of writing award applications.
AniMedes has done quite well so far, but our success is closely tied to the success and speed of digitalization of hospital infrastructure and the availability of the right hardware. So it takes time, as well as patience. AniMedes is being implemented within two bigger hospital groups in Austria and we plan to deliver our solutions and media to all their locations in the next few years.

What are your plans for the future? How do you plan to work together with doctors and hospitals?
As mentioned before, we are currently working with a few private clinics and bigger hospital groups to prepare a large scale rollout of AniMedes. Our approach to work with doctors and hospitals is a very personal one. I want all my customers to know who we are and why we do things the way we do. A personal meeting is always better than e-mail. To maintain close contact with our customers once the Software is used in many different clinics, we work closely with our partner company vielgesundheit.at who helps us in terms of customer management, marketing etc.

Do you have any tips or advice for all the other young social entrepreneurs and start-ups to bring their projects on the success track?
The biggest obstacle and difficulty for me personally was that I started out without a team.
During the early stages of the development of my idea and business, I had friend and colleagues who helped me, but nobody really opted to work with me on the project full time. So for a long time it was only me working on AniMedical and the Software AniMedes, with background help of course of my co-founder Prof. Hölzenbein, MD, who was obviously a big help. But in conducting the start-ups daily affairs, I was alone.
Looking back now, I’m quite sure that the company could be miles ahead if there was a team right from the start. So my advice is to get a strong and competent team together. Focus on the jobs that need to be done and then get the people who will do it most fervently. When in doubt, also get people on board who are excellent in their field and who are not afraid to challenge you if need be. The last thing you want is a bunch of (please excuse the term) lickspittles who won’t tell you that your newest idea is really bad.