Interview with #EYA18 Winners from “Studentist” 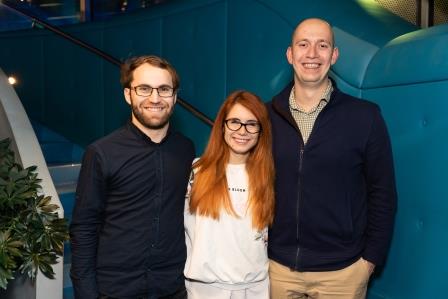 How did you come up with the idea?

Ana-Maria: Well, I am from Romania, a student of dental medicine. There we needed to find some real patients in order to pass some exams. The problem was, even though our services were the same quality as the ones provided by the doctors, people didn’t know about us and that they can come to us and have their dental problems solved. I contacted one of my friends who is good at programming and just said ‘Let’s make something that will connect us’.

How was it hard to make the program?

Stefan: At the beginning, it was hard, much harder than I thought it would be. The app was published on both android and apple store platforms, after several months I was Stefan’s new collegue in the company in which we work, he was discussing stuff and representing his project and I said that I wanted to join. So, the team increased with one new member. He did the hard work at the beginning to launch the first version and after that we together built the features for the app, to have it more complex.

Do people find this application useful? How did they react?

Stefan: We receive a lot of messages, esepecially on facebook. They are proud of the app and very grateful, and they wanted new features as well. We asked them what to they think we need and after the survey we saw the needs and started to build up additions based on it.

How much money did you need for his project?

Mario: Actually, we didn’t need much money. Making the program was free but if you want to launch any application, you need to pay subscriptions. We paid also for our website because we need to have an official page to publish all the information on how to use it and what is the aim.

Did you make any profit?

Stefan: Right now – no. But we are planning to. We need to find source of money to keep doing this and we have some plans to become unsustainable.

How hard was it to connect all students from different counties?

Mario: Right now it is only for Romania. We connect them via facebook. So we created a page where we published all the information and Ana somehow had connections with those dental students. She is the representative. This is a good opportunity because they need to have practical work. It is also an advantage for patients.

When you applied for the EYA were you afraid of losing?

Stefan: We didn’t have a purpose to win or lose. We just wanted to participate and to present the real purpose and real need of the app. So, it is not about fear of winning or losing, we feared that our message wouldn’t be understood by the jury. We wanted to make them understand the situation. This was the most difficult part from my point of view. Also, we are aware that there is a similar situation in some other countries, so our next step is to make application available not only in Romania.

How many patients did you have after publishing this app?

Stefan: We had about almost 4000 downloads by now. These are statistics. We have about 900 cases.

What about the old people who probably don’t use the Internet? How can they contact you? Is this the only way?

Ana-Maria: That is the problem in every country for people who are not using new technologies. For example old people can ask their nephews to make appoitment for students. Actually, I saw many old people using smartphones when I was working.

What is your next goal?

To make our app available in more countries.

Interviewed by Đorđe, Milica and Ognjen

This article/video has been created by participants of the youth exchange “Media Moving Forward” that was coordinated by the Youth Press Austria and supported by Erasmus+ programme of the EU.