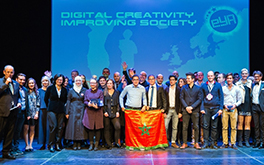 Social Entrepreneurship: Making a change is the reward

Surrounded by a huge crowd consisting of creative individuals active as entrepreneurs, I felt at home, at the climax of the European Youth Award 2017 at Dom im Berg Graz.

Attending the event for the past days I marveled as all the workshops, inspiring words on stage and the manifestations of the common goal to solve social, environmental and economic problems came to a conclusion. Everyone who is willing to go the extra mile to work for the good of the world is welcome in this amazing network and will be supported if he or she wants to contribute.

The gala event was hosted by the incredibly charismatic Adam Montandon from Denmark who embodies the spirit of the festival in a way that being encouraged to carry it further was inevitable for me; I’m convinced that everyone attending it would agree.

Odeta Iseviciute put it pretty well: “As a social entrepreneur, financing such a project is often a problem, but in the end it’s way more rewarding because you have a positive impact on society”.

I fully agree. In terms of doing things that benefit others (i.e. voluntary work) I’m pretty experienced, but the lack of actual networking makes it hard to have a sense of community. At EYA everything is centered on having that feeling of friends and family, so in my opinion this is what makes the festival so productive and festive.

Further in the gala program we celebrated the winners and everyone attending the event together. There were some drinks and the musical part was provided by the great local Beatboxer and DJ Ivory Parker.

Personally I’m still amazed by how approachable everyone at the festival is. Everyone I talked to was more than willing to share their individual stories and beliefs. I got to know a lady who briefed me about cigars for 30 minutes, a crazy Brazilian games programmer, a spacial architect with a refreshingly uncommon world view, a design student from China who is brilliant in her field, a workaholic who puts in more hours than two people combined, a local app developer who put his heart to stopping hate online and so many more.

In conclusion:The European Youth Award is not only a party or workshops. It demonstrates that everybody knows what the incentive for doing good in the world is. It shows that you can change the face of the world. It empowers ideas, creativity and a positive outlook on what social entrepreneurship offers. I advise everyone who is reading this article to join EYA 2018. Whatever your background is, you will get ideas on how to put it to good use. Since this is basically a networking event, let’s connect!