Ask yourself if what you’re doing is right and if it is needed! 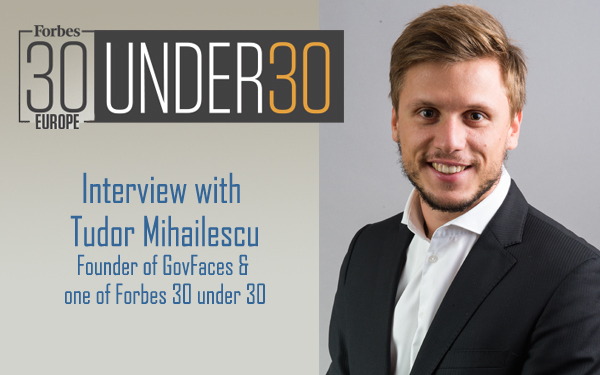 Tudor Mihailescu is a PhD Candidate in Political Science at the Graduate Institute of International and Development Studies, Geneva and a co-founder at GovFaces. In January 2017, Tudor was nominated by Forbes Magazine on its Europe 30 under 30 list of most influential change-makers in the Law and Policy sector.

What was your motivation / intention to found GovFaces?

Our work is motivated by what I would call the “civic internet paradox”. Whereas the web was initially seen as a way to bridge the communication gaps between citizens and politicians and among the various social strata, it actually ended up exacerbating them. Unfortunately, nowadays, the opportunity for meaningful political debate online is cut short by noise, fake news, trolling, and echo chamber effects. We founded GovFaces because we believe that the Internet does indeed hold the promise for strengthening democracy and ensuring social cohesion, but only within properly designed deliberation frameworks.

How would you describe your project?

GovFaces provides tailored platforms for verified discussion at scale to governments, parties and international organizations. The GovFaces platforms are built for facilitating two-way discussion by allowing users to post content through either asking or answering questions. Every question can be voted by community members to express their interest in receiving an answer. This allows policy-makers to respond to hundreds or thousands of people through just one message, which saves time and reduces information clutter. Finally, the GovFaces platforms have an in-built verification mechanism for checking the unique identity of every user, as a way to limit trolling and encourage members to take responsibility for the accuracy of the information they post.

GovFaces is collaborating with the UN now. Can you tell us a bit more about this partnership?

In one of our current projects, we are providing a tailored discussion platform for the Perceptions Change Project, under the Office of the Director General of the United Nations Office in Geneva. They are setting up an online focal point for public debate on the U.N. Sustainable Development Goals. The SDG Stories platform is hosting conversations between leaders, experts, celebrity figures and the wider public on various global issues, from climate change, to child trafficking and sustainable fishing.

You are the overall winner of the European Youth Award in 2014. Can you describe your experience? What were the most valuable things you learnt for your project?

I remember that the greatest lesson I learned at the time was to stay humble. After months of intensive work on GovFaces development, I came to the EYA Gala in Graz ready to competitively defend the merits of our project against the others. Once I arrived there, I was so overwhelmed by the talent and knowledge of the other participants that I realized my greatest gain would be to simply enjoy the discussions and learn as much as possible from the other entrepreneurs.

What do you think are the major factors of your success?

If I were to name one factor, that would be persistence! We really believe that the work we do can have a positive impact on the world. And this belief is what kept us going for the last three years, despite all the difficulties that we encountered. And trust me, the road to where we are today was not at all plain sailing!

You are one of Forbes „30 under 30 Europe“. Was that a surprise for you? And how is this influencing your business?

A few years back when we started our work on GovFaces, people wouldn’t really understand why there was truly a need for two-way online conversation. Over the last year, in the context of the British EU Referendum and the US Elections, people have begun to realise that political social media is not as « social » as it was assumed to be. Our nomination on the Forbes 30 under 30 list is important because it represents an acknowledgement that there is indeed a communication deadlock that needs to be solved. Achieving wide recognition of the problem empowers us and other organisations who are actively seeking to find a solution.

What are your plans for the future?

Our vision is that five to ten years from now, the verified discussion platforms that GovFaces provides will become standard practice at all government levels across the world. On the short-to-medium term, we are focused on consolidating our position on the Geneva international organisations market and expanding our client base to local and national governments in Europe.

Do you have any tips or advice for all the other young social entrepreneurs and start-ups to bring their projects on the success track?

Ask yourselves if what you’re doing is right and if it is needed! If the answer to both is “yes”, then go all in and have faith it will all turn out well! Don’t fix arbitrary deadlines for when to succeed. If you know the world needs your product, then it’s your responsibility to make customers realise they need it and convince them to use it. Be persistent and never give up!

Oh … and be kind along the way! If you are ever to succeed, it will be because people will open doors for you at the right time. So, remember to open doors for others, when they need it!